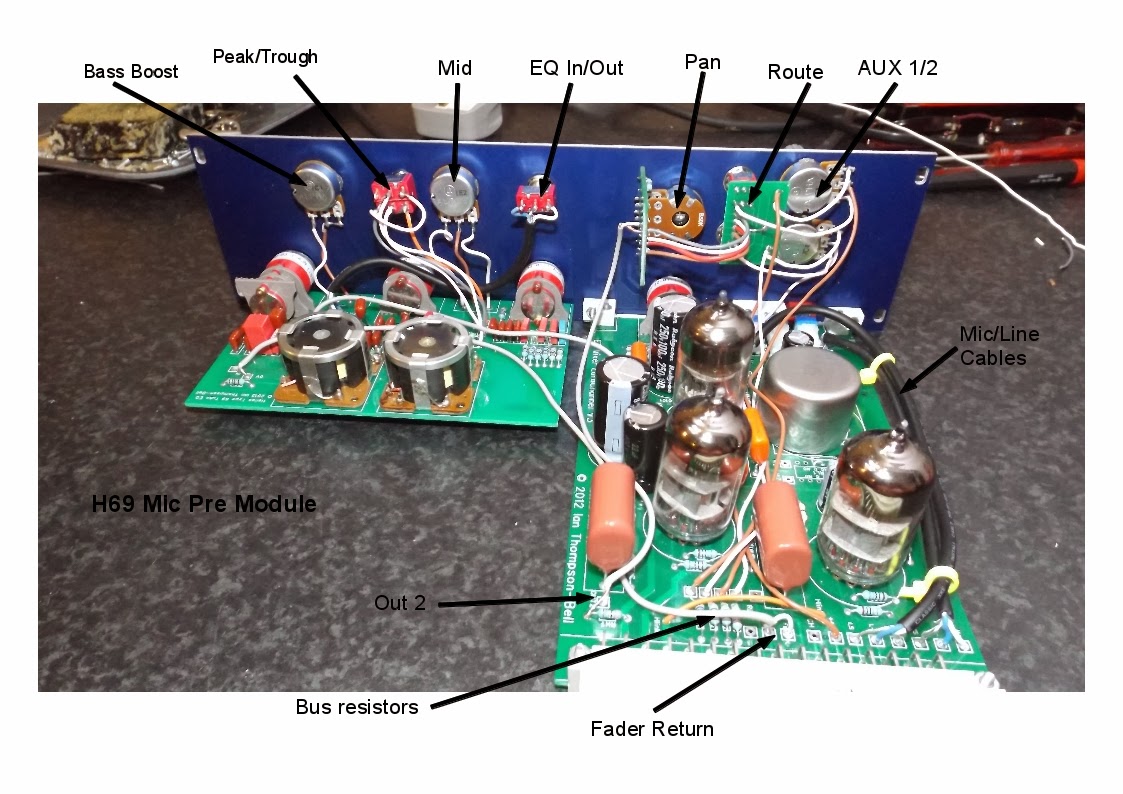 The picture above shows a completed channel amplifier incorporating a Helios 69 style EQ. This is instructive for illustrating the amount of hand wiring required to complete a typical module. Some of this is unavoidable and some of it could be simplified as will become apparent.

The PCB on the right is the channel amplifier which contains two complete valve amplifiers. The PCB on the left is the passive Helios Type 69 EQ. All connections to and from the channel are via the 32 way DIN connector at the bottom right of the picture. I will describe the overall signal path and the wiring associated with each part of it.

Mic and Line signals enter through the 32 way DIN connector and connect to nearby pads. They need to connect to the push buttons on the front panel. Rather than track these across the PCB and risk picking up interference in these low level signals, they are run across the board in the screened cables at the right of the channel amplifier. From the push buttons the mic and line signals are routed via the microphone transfomer to the first valve amplifier the output of which goes to the 32 way DIN. This signal normally would feed an external fader. In this mixer the intention is for it to feed an unbalanced insert, the return from which feeds the fader. The return signal from the fader is connected back to two pins on the 32 way DIN (labelled Fader return in the picture above). From here they are wired via a screened cable to the input of the EQ PCB.

Three of the Helios EQ controls are on the PCB itself. The remainder, the bass boost pot, the peak/trough toggle switch, the mid gain pot and the EQ in/out toggle switch all need to be hand wired to the PCB. This is not particularly difficult or awkward but this is a relatively simple EQ. The Pultec EQ, for example, has six pots and two switches to wire up i.e. twice as many as the Helios EQ. Both EQs would be easier to wire up if the off board controls were all on their own PCB with just a single plug to connect to the EQ board itself.

The output of the EQ is connected to the second valve amplifier which has a preset gain sufficient to make up for the loss in the passive EQ and to allow for 10dB in hand on the channel fader. The output of this amplifier appears on the 32 way DIN and also at a pad labelled Out 2 above. The DIN connector output is used if a direct output is required or if an external routing module is used. In this case the routing is contained within the channel module so a screened connection is made from OUT2 to the pan pot (see picture). This channel module uses the Smart Pan which allows two toggle switches to route to individual channels or engage the pan pot or to mute the channel. The wiring for this would be quite complex so a small PCB was designed to do this. It is split into two halves - one for the pan pot and the other for the two routing toggle switches. Just four wires are required to connect the pan pot PCB to the Smart Pan toggle switch PCB. Two wires, one for left and one for right, are connected from the Smart Pan PCB to the bus resistors which then connect to the 32 way DIN.

Lastly, 0V and OUT2 signals from the Smart Pan PCB are hand wired to the two AUX send pots (both of these are post fader sends). Individual wires from the sliders of these pots are wired to the remaining two bus resistors.

Construction would be simplified if fewer hand wired connections needed to be made. Some, like the mic and line screened cables, are unavoidable but could perhaps be simplified by using connectors. The EQ would certainly benefit from a PCB to hold all the controls that will not fit on the main EQ PCB and this should be connected to the EQ PCB via a single cable - possibly a ribbon would do.

A small connector for Out 2 would be useful as would combining all the pan, routing and AUX send components onto a single PCB. This would need a 2 pin connector to Out 2 (via a screened wire) and a 4 pin connector to the mix bus resistors (possibly a ribbon).

At the moment it is not possible to set the gain of the second valve amplifier with the modules plugged in so another improvement would be to move that component near to the front panel so it could be accessed through the front panel with a screwdriver (thanks to Holger for this suggestion).
Posted by ruffrecords at 09:18